Making up Chair Numbers – One

Fine Georgian dining chairs were made for the genteel people of the day. Because they didn’t lean back loutishly in their chairs, stressing and breaking their every joint, furniture designers and chairmakers contrived ever more delicate chairs.

With the advent of heavier, stronger, mass-produced chairs in the late eighteenth- and early nineteenth-centuries, and even later, twentieth-century metal-framed chairs, the recalcitrant unwashed took the humble chair for granted, swinging about on them with disregard and many examples of early chairs have now succumbed to the ravages of time.

It’s therefore often the case that an antiques dealer will have a depleted set of dining chairs which would have originally amounted to fourteen or even more chairs. It’s not uncommon for a dealer to have a few copies made up to expand an abridged set of, say four or six chairs, into a set of six or eight chairs which is the average requirement for modern day dining rooms.

I received one of a set of five or seven original circa 1780 Georgian mahogany chairs (I can’t remember the exact number) from an antiques dealer and was asked to make a copy to complete the set, thereby making the set, commercially, more attractive.

The road to Hell, it has often been said, is paved with good intentions and such is the case with my photography over the years. I repeatedly pledged to take photos of every stage of every job, but I find commercial enterprise usually overrides the romantic notion of preserving my endeavours for posterity.

At least I took these three photos of the chair. 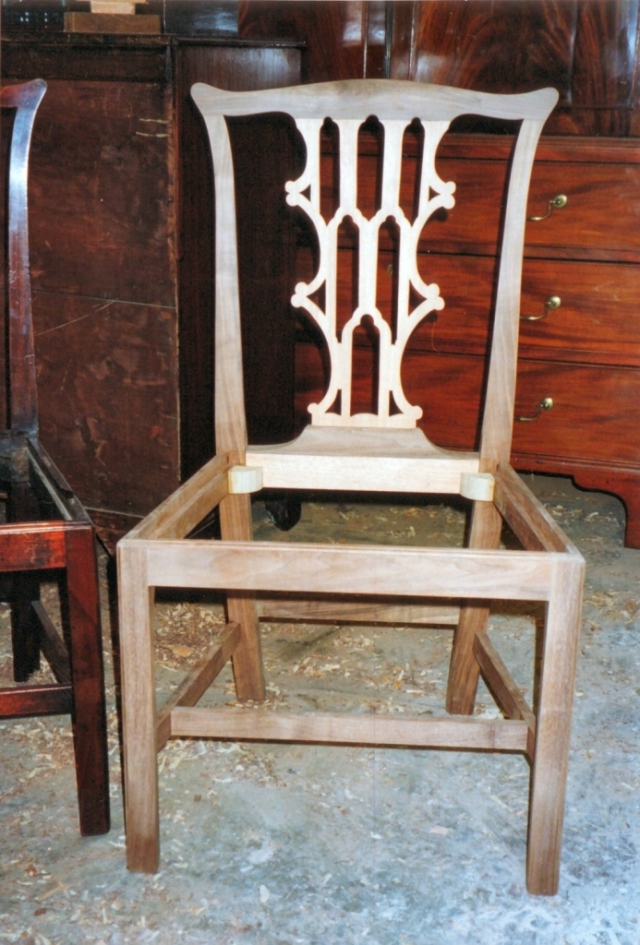 The copied chair coloured, aged and waxed to match the original sample.

Formerly from the UK, Jack is a retired antiques dealer and self-taught woodworker, now living in Australia.
View all posts by Jack Plane →
This entry was posted in Seating. Bookmark the permalink.