A Dog in a Manger

I have had many a great dog in my lifetime, but with the best will in the world, I can barely remember all their names. What I do recall however, is none of them ever slept in the house at night.

After moving to Australia, we are now on dog number three. Our first Australian dog, a Fox Terrible, like all its predecessors, went out at night. She was an excellent workshop dog and took her job of guarding walnut logs very seriously.

Then she got sick. Apparently sick dogs are incapable of sleeping in a warm dry kennel – not even with one of their large adolescent pups for company. So a folded blanket was arranged in a corner of the kitchen and Sick Dog and Trainee – who, I ended up agreeing, would have been distraught all alone outdoors – spent their first summer’s night indoors in stifling heat.

They never went out at night again and their blanket was moved to the living room and was soon replaced with their own Special Beanbag because it transpires that a folded blanket, plush carpet and underlay are too uncomfortable for dogs to lie on. Sick Dog and Trainee looked up at me smugly from their Special Beanbag when I glared at them from my far superior sofa, even smugger in the knowledge that dogs aren’t allowed up on the furniture.

Sick Dog up on the furniture.

Sick Dog eventually succumbed to The Vet. That just left Trainee who, by all accounts, was so bereft and forlorn that Virginia comforted him on the sofa beside her and I was relegated to an exceedingly uncomfortable chair that we had been meaning to throw out for some time.

Trainee graduated to the exalted position of Workshop Dog, doing sterling service protecting the shop from The Paying Enemy and tunefully notifying me, with up-turned chin and lips pursed, when the ‘phone was ringing and I had my ear muffs on. He was also adept at removing the glue squeeze-out from chairs etc. when I was otherwise busy, and regularly enjoyed growling at the old man who we used to see with just his legs protruding from the skip behind the greengrocer’s shop. 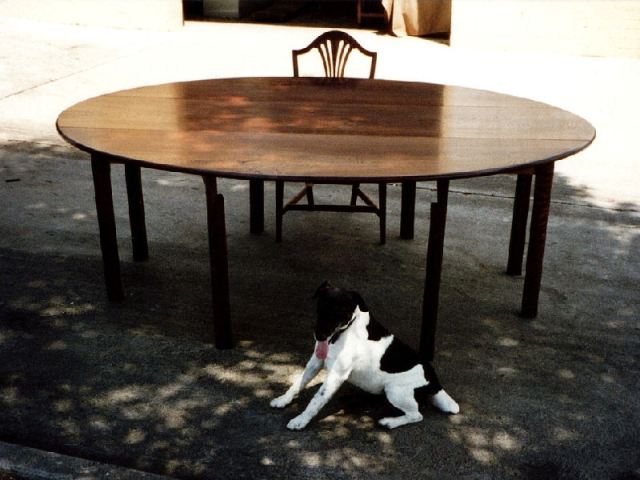 Workshop Dog II never got up on any furniture at work, though The Boss’ Big Chair was often inexplicably warm when I went to answer the phone. Workshop Dog II continued steadfastly with his feet on terra firma until one stormy night, when, presumably, a clap of thunder occasioned him to land awkwardly on my groin as I lay sleeping. Dogs were seemingly allowed up on beds now.

Thenceforward, Workshop Dog II did bless our mornings with his presence, ascending the bed in a somewhat more genteel fashion though. He did have the good manners to wait, scratching noisily at the bedroom door until the alarm went off which was nice.

Then I got sick and closed the shop and Workshop Dog II was devastated. For being such a good boy (part of The Succession Plan), Virginia brought home The New Trainee for him, this was met with huge approval. Workshop Dog II educated The New Trainee methodically, although by this stage, virtually any comfortable horizontal surface in the house was fair game for a nap. 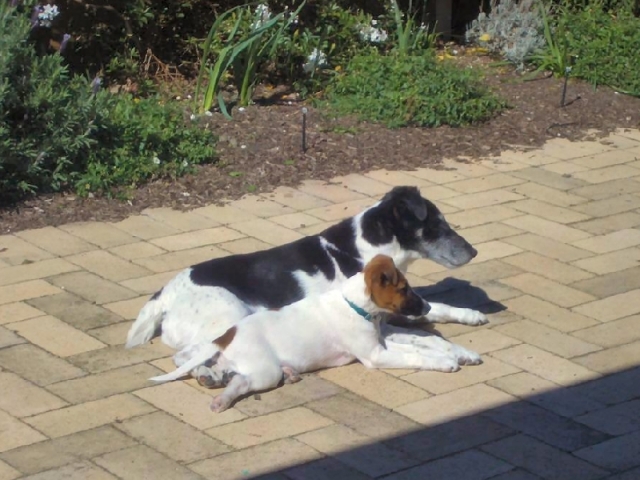 The New Trainee being instructed in Watching Intently.

Workshop Dog II got sick and also succumbed to The Vet. Trainee II is too young to tutor a successor, so she now lies alone in the Special Beanbag at night. She too dutifully waits at the bedroom door of a morning quietly letting us know of her presence until The Bell of Adulation and Caresses sounds and she springs onto the bed.

But this isn’t enough for a dog in a family of increasingly spoilt dogs, so having now graduated to the lofty appointment of Shed Dog, it was soon proposed she had earned herself a new bed to replace the flat and sorry looking Special Beanbag. Why an indolent and already overly pampered dog should deserve such a concession eludes me. Natheless…

A hammock, frame and cushion design was agreed upon for The New Bed that wouldn’t look out of place in the living room. So I bought four shiny brass cup castors and turned four short mahogany Regency-ish legs on the lathe to suit them. Mortises were bored in the legs with a 1″ Forstner bit to accept the round side rails.

The castors were cheap reproductions and not of particularly good quality – probably made somewhere on the subcontinent. I fettled them so they’d at least work properly and then banished them to the Bucket of Wrath to take on some colour and age.

Dear me the castors really were shite and briny!

Aiming for simplicity, I decided on 30mm diameter Victoria Ash (Eucalyptus regnans or Eucalyptus delegatensis) dowel for the side rails. I centred the lengths of dowel in the lathe, turned down the 1″ tenons and then mitred their ends.

The tenoned and mitred rails.

I glued the frame together with horse sauce, the drips of which Shed Dog was grateful for. I decided against chemically ageing the frame (as I would with most mahogany furniture), instead, choosing to stain it a medium mahogany colour. This was followed by several coats of spirit varnish, cut back between each.

The first coat of varnish drying in the afternoon sun.

The castors, following their confinement in the Bucket of Wrath.

I binned the tacky Pozidrive brass screws that were supplied with the castors and attached them to the legs with more appropriate slotted steel screws. All that was left to do to the bed frame was give it a good waxing.

The bed frame, waxed and mobile.

All the upholstery had to be removable and washable. The hammock component was made from a deep blue poly-cotton with strips of Velcro attached to secure it around the frame rails.

The hammock stretched over the bed frame.

The blue-on-white Chinoiserie toile chosen for the cushion cover was washed to pre-shrink it and remove the mill dressing. I dragged out the old Singer and whipped up a box cushion cover to suit a washable cushion insert.

I’m not sure any longer which of us the dog in the manger is.

8 Responses to A Dog in a Manger