The brass door bolts I was waiting for have now arrived. While they’re cast in period-correct brass alloy, they are not without issue. The bolts are cast using the lost wax process from genuine, period hardware, but after extended use, the moulds can become a little tatty and because each wax armature produced from the mould is indistinguishable from the next, the end result can be a batch of identical, slightly tatty bolts.

Original eighteenth-century bolt plates would have been laboriously sawn and chiselled from brass sheet and their edges neatly bevelled with a file. The reproduction bolts however, have that cast look about them; the surface is uneven, the bevelled edges have lost definition and there are a multitude of premature cooling creases, casting flashes and annoying little dags. So, as with the escutcheons, I set about tidying up the bolts.

I draw-filed the faces of the bolt plates to make them perfectly level and to appear as if cut from flat brass sheet. The profiles were then filed which ultimately gave each of the bolts the correct individual ‘hand-made’ look and finally, the bevels were sharply redefined with a series of riffler files. 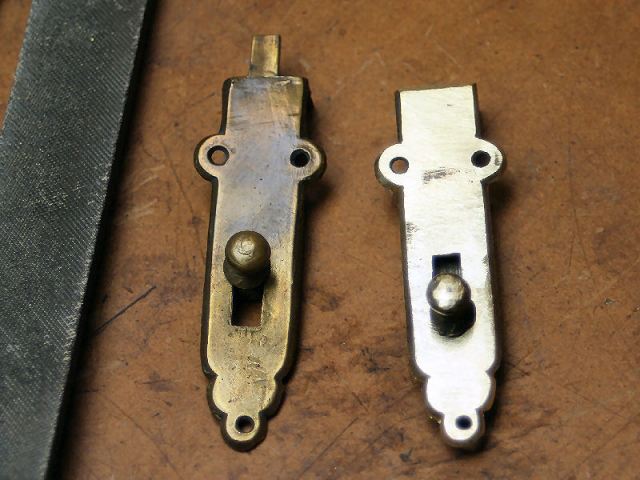 Two bolts, before and after filing.

The next step was to lightly distress the bolts and then buff them on a wheel. When antiquing brasses of ‘this age’, I don’t further colour them with finer compounds after the buffing process.

Two of the buffed door bolts.

The brasses and brass pins were carefully arranged on a wire rack ready to be placed in the Bucket of Wrath containing the antiquing chemicals.

The brasses ready for antiquing…

… and after they’d spent a few hours in the Bucket of Wrath.

I rinsed the brasses in hot water and rubbed back the verdigris on one of the lock plates to satisfy myself of the degree of ageing. The remainder will be judiciously rubbed back before fitting to the cabinet.

Formerly from the UK, Jack is a retired antiques dealer and self-taught woodworker, now living in Australia.
View all posts by Jack Plane →
This entry was posted in Case Furniture and tagged antiquing, door bolt, lost wax, verdigris. Bookmark the permalink.