My inspiration for this Windsor chair derives from a unique style of comb-back chair produced in the Thames Valley region of South East England from around 1730 through to roughly 1800.

The chairs of this ilk all share very distinct characteristics; the seats exhibit the same ‘D’ or bell shape (with a typical straight front edge) and all four legs are bold ‘Goldsmith‘ baluster pattern united by bulbous turned ‘H’ stretchers.

Where present, arms are broad with horizontally-scrolled terminals, supported on turned front posts. Comb-back crest rails are either plain or gently shaped and are raised on an even number of back sticks – usually eight. 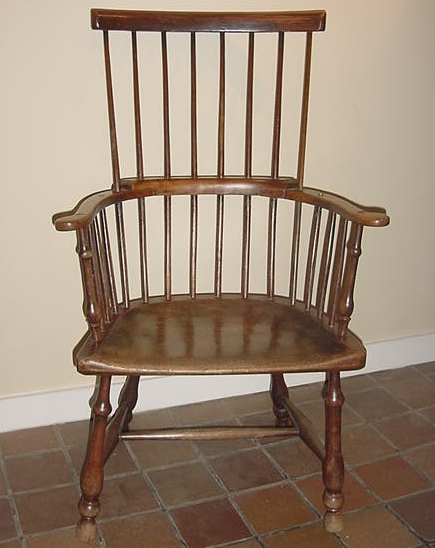 The arms of these chairs are made of three separate pieces of wood which are lap jointed to form a continuous arc; the lap joints on some chairs span two back sticks, while others intersect a single back stick. The addition of steel screws, inserted from beneath, contribute to a strong, rigid arm.

The chair below possesses the same leg profile, three-part flat scrolled arm and eight back sticks as other chairs of the genre, and has a shaped crest rail. The sawn crescent arm supports are a common alternative with these Goldsmith-esque chairs. 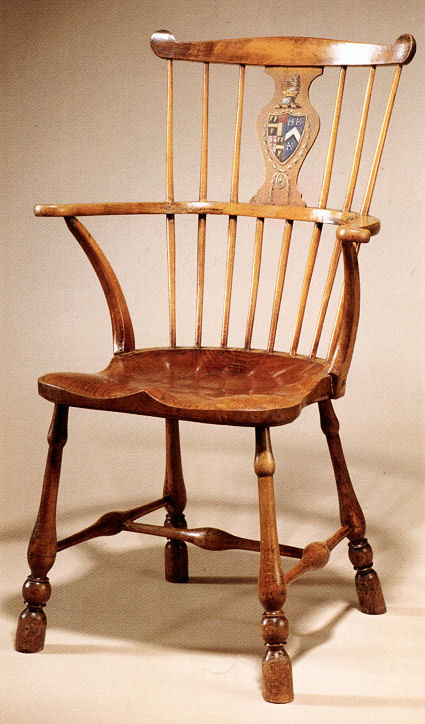 The Claremont side chair below exhibits an even number of back sticks (four), but has the unusual addition of three brace sticks; the original crest rail now replaced. 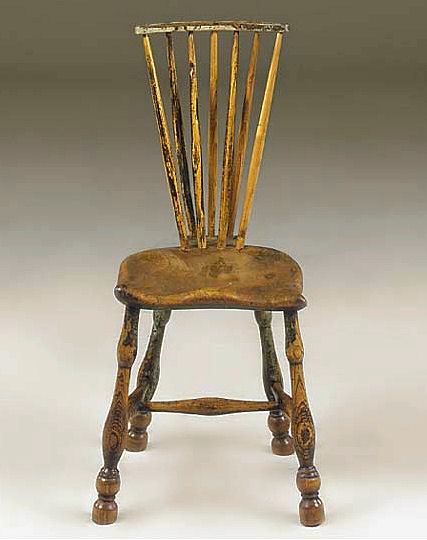 Thames Valley fan-back side chair, circa 1760.

The arm of the elbow chair below (formerly in the Parker Knoll collection – now the centrepiece of The Frederick Parker Foundation at the London Metropolitan University – which I had the opportunity to inspect on several occasions while in mothballs at, the then, private house, Brympton d’Evercy in Somerset) with its shaped crest, is still of three-part construction. The legs and seat shape conform to the genre.

I don’t have a steam box any longer and I don’t really have the room or inclination to possess another, so one of the main attractions of this style of chair, for me, is that it has no bent components; both the crest rail and the three-part arm are cut from the solid.

The seats are typically of elm with the grain running from side-to-side on elbow chairs and front-to-back on side chairs. The legs and sticks are normally ash and the arms and crest rails can be ash, elm, drupaceous fruitwood or walnut.

I have a fairly large quantity of European Ash, so the legs, stretchers, sticks and crest rail will all be of ash. I also have a stack of English Walnut, so while I’m tempted to use some for the arm and arm posts, I have yet to convince myself it is the right choice.

Formerly from the UK, Jack is a retired antiques dealer and self-taught woodworker, now living in Australia.
View all posts by Jack Plane →
This entry was posted in Seating and tagged ash, comb-back, elm, Goldsmith legs, Thames Valley, Windsor chair. Bookmark the permalink.