I have seen girandoles, mirrors and sconces that were suspended by string or wire twisted round nails hammered into the backs of the frames, or even the sides (which will at least keep girandoles and sconces vertical on the wall), but I prefer proper ring-screws or screw eyes with chains, or one or two picture plates screwed to the frames. The weight of the glass plates can be considerable and the last thing I want is to be woken in the dead of night by a heavy glass plate impacting the dog, the floor, or perish the thought; other furniture!

For a reason which immediately escapes me, I still have some off-cuts of authentically (for the eighteenth-century) alloyed brass sheet left over from my restoration days. I thought I had disposed of it all ages ago, but a few pieces surfaced quite recently while searching for something entirely unrelated.

I took a piece of suitable gauge and cut out and drilled two picture plates. I countersunk the holes and carefully filed the edges before brightening them up a bit. 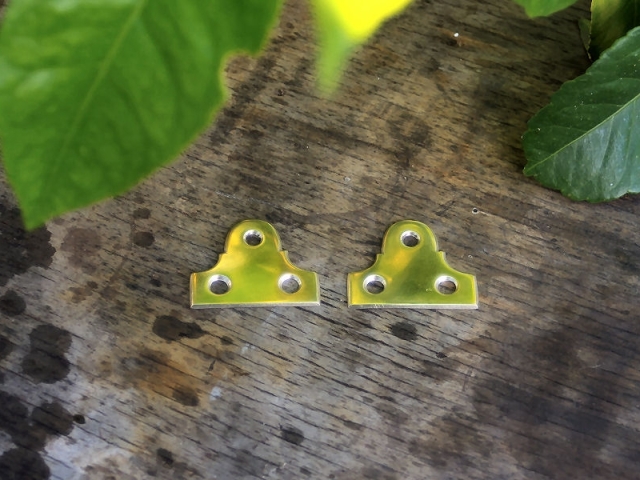 The two picture plates after buffing…

…and after they’d spent an afternoon in the Bucket of Wrath.

A single picture plate will be screwed to the top centre of each girandole frame; behind the fret which should be sufficiently safe to hang them by… time will tell.

Despite the admirable dint of my broadly travelled factotum, no mercury glass could be located within the allotted time or budget – apparently $3,800 was the asking price for a rough old painted Vicky mercury glass overmantel in a junk shop somewhere near Warnambool! “Where?” I hear you cry. “Precisely!” quoth I.

Notwithstanding, an old-ish silvered plate was secured locally, from which were cut, a couple of smaller sized plates for the two frames.

There were a few nervous moments cutting these two!

Once the off-cuts and lethal shards had been carefully wrapped up in newspaper and disposed of, I set about simulating the degradation of the amalgam commonly seen round the periphery of genuine mercury looking glasses.

The plates are intentionally a loose fit in the frames – about 1/8″ (3mm) all round  – and are retained by split, triangular pine glue blocks which are rubbed onto the inside of the frame rebates. The glue blocks effectively wedge the plates in place, preventing them from rattling around yet allowing for some expansion and contraction.

The glue blocks also act as stand-offs, maintaining a space between the back of the plates and the backboards. The backboards are simply held in place with a few cut brads tapped into the frame.

The back showing construction, picture plate and backboard.

I fear the candle branches have been held up in the UK due to a combination of the normal seasonal postal rush and the abominable snowy weather they’re currently experiencing. I shall conclude this series as soon as is possible.