A George I Walnut Side Table – Part Two

I would normally begin such a table by preparing the legs and then the carcase (well actually I have; they’re well underway – more on that in a later post), but behind-the-scenes chatter and some premature sharing of images prompts me to commence this entry with the table’s top.

The groundwork for the top consists of three pine boards, first rubbed together and then squared up. The re-entrant corner blocks are single piece items that meet the groundwork at a 45° angle to enhance the glue contact area. The positioning of the walnut corner blocks at 45° to the front edge of the tabletop means I can carve the full ‘babies’ bums’ without encountering end grain – which makes life a little easier.

The moulded (walnut) edge is achieved by gluing small cross-grain blocks of walnut to the tabletop’s edge. It’s worth examining this process in some detail as the two common methods of attaching the blocks can result in very different effects. One method is to plane a rebate around the periphery of the tabletop and then glue strips of cross-grain blocks into the rebate (with the grain direction either horizontal or vertical). The problem with this is that once moulded, one will see significant endgrain, which, when finished, will appear as a hard dark line along the upper or lower half of the moulding depending on whether the blocks were orientated horizontally or vertically.

I prefer the method where the cross-grain blocks are glued on at an angle (in keeping with most walnut-on-pine mouldings of the period) so the endgrain effect is gradual and reduced overall. To this end, I planed a 45° chamfer around the front and side edges of the tabletop. I rubbed a series of cross-grained blocks onto the chamfered edges. The glue contact area achieved with this method is not as great as gluing square blocks into a rebate, but is more than adequate.

Tabletop with walnut edging and corners glued in place.

The tabletop was squared up for a second time and the profiles of the baby’s bum corners were cut into the corner blocks. 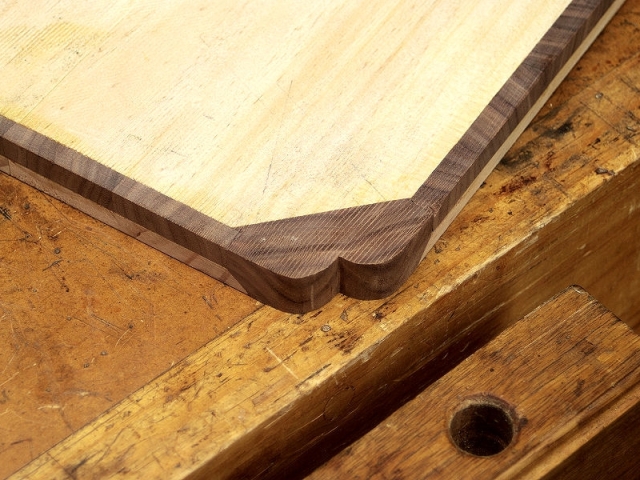 The tabletop finely toothed and ready for veneering.

Veneer was laid vertically around the tabletop’s edges prior to laying the main veneers onto the top. The thick, quartered veneers were pinned at their corners to prevent them curling up while the glue dried.

The main veneers laid down.

The main veneers were trimmed to size and then the feather- and crossbanding were laid.

… and carved around the re-entrant corners. 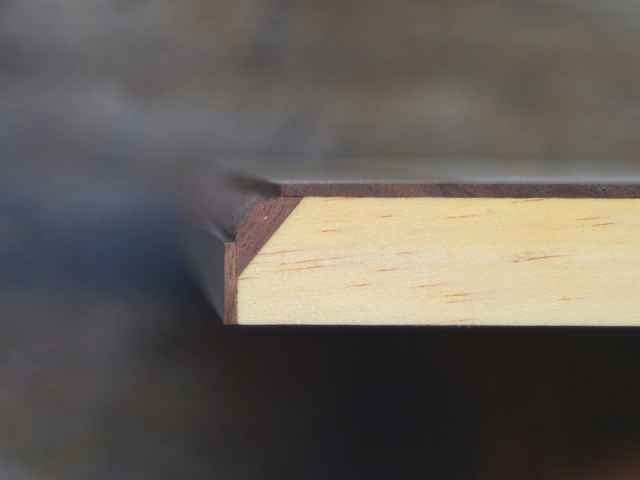 The ovolo-bead moulding from the back.

The tabletop was scraped smooth and given a final clean up.

Formerly from the UK, Jack is a retired antiques dealer and self-taught woodworker, now living in Australia.
View all posts by Jack Plane →
This entry was posted in Tables and tagged featherbanding, moulding, table, veneer, walnut. Bookmark the permalink.

4 Responses to A George I Walnut Side Table – Part Two