While making the William and Mary Walnut Chest of Drawers, a reader enquired about the method I used to lay thick and oft unyielding veneers and I replied that, where appropriate, I invariably resort to pinning them down in the margins which are ultimately trimmed off. However, it’s not uncommon to see tell-tale pin holes in period veneered work. They are often visible either side of a split or joint, on corners, or anywhere the veneer refused to comply.

Normally the pins were withdrawn for reuse once the glue had dried, but occasionally they snapped off – or were simply too short to grab hold of – and were simply hammered home. In the course of restoring veneered furniture of this period, one occasionally sees small black iron/tannin stains on the ground work which mark the site of the veneer pins; or rust stains which witness where the remnants of pins rusted away.

To the untrained eye, pin holes in the veneer surface can blend with the multitude of blemishes and general patina, but when you know what to look for, and in which areas, the small holes become obvious.

A George II walnut chest of drawers, circa 1730.

The same image showing the placement of veneer pins.

I had a box of eighteenth/nineteenth-century veneer pins many years ago. The label on the box announced they were “№ 36 Veneer Pins” which I took to mean they were cut from 36 gauge sheet steel. At any rate, they appeared to be guillotined or sheared from thin sheet steel, gradually tapered and square or slightly trapezoid in cross section which assisted them in cutting through the veneer rather than wedging their way through and splitting the veneer. They were exceedingly sharp; even the sides could slice ones fingers.

The last lot of ‘proper’ veneer pins I bought was in the 1970s. They were more akin to heavy duty sewing pins with blued (presumably hardened) round shafts and large heads. They were capable of being struck lightly with a hammer without bending, but they were prone to snapping off when being withdrawn. Their bullet-like tapered points were inclined to split the veneer – especially close to the edges.

The ‘veneer pins’ I use now are sold at my local hardware outlet as “25mm x 1.2mm panel pins” (1″ x 16 gauge). They’re basically very fine bullet head bright wire nails with the same, (undesirable) sharply tapered points. Before use, I hold them vertically on a firm metal surface and tap them with the hammer to blunt the points so they punch their way through the veneer without splitting it.

Prior to mechanised production and the broad availability of veneer pins, cabinetmakers must have relied more heavily on wooden cramps to secure errant veneer, though they were not totally without means with which to affix small mouldings and veneers. Fine steel pins were technically feasible, but not affordable in the quantities required by the majority of cabinetmakers in the seventeenth- and early eighteenth-centuries. The cheap, but impure wrought iron used for general nails lacked the grain structure to produce very fine pins without crumbling. However, the earliest joyners were in possession of technology borrowed from the ship-building and house-framing trades. 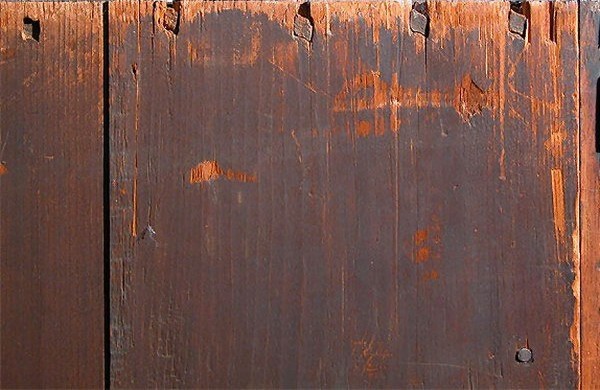 Trenails used to secure backboards to chest of drawers, circa 1780.

The similarity between these fine trenails and some varieties of thorn, such as those of the Blackthorn (Prunus spinosa), didn’t escape the notice of early joiners. 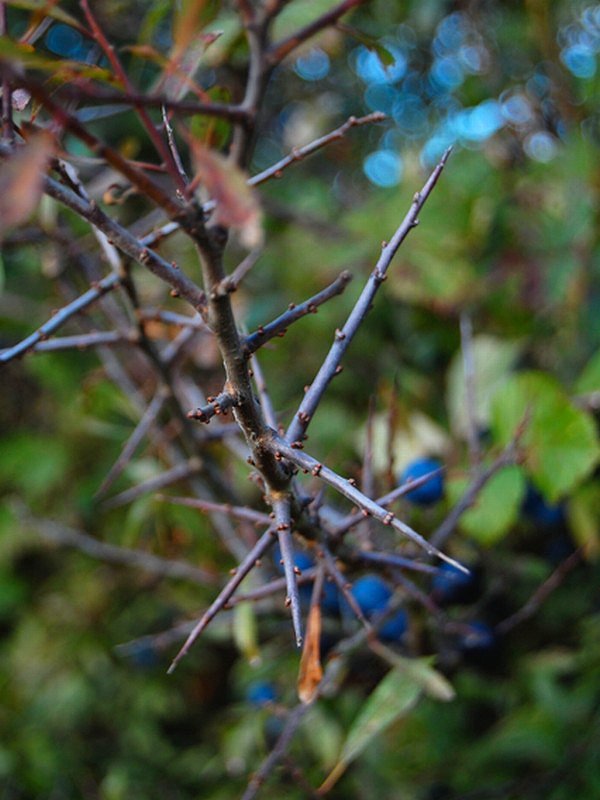 Thorns of the Blackthorn.

Blackthorns and other species of prickly shrubs produce notoriously tough (and highly injurious!) long tapering thorns, which, after peeling and drying, could be employed on furniture in place of steel pins. Thorns and trenails largely go unnoticed when inserted through mouldings, but, as in the unusual instance of the elm chest of drawers below, can be quite apparent when used to secure the veneers.

Formerly from the UK, Jack is a retired antiques dealer and self-taught woodworker, now living in Australia.
View all posts by Jack Plane →
This entry was posted in Case Furniture and tagged blackthorn, drawbored, mouldings, thorns, trenails, veneer, veneer pins. Bookmark the permalink.

3 Responses to A Thorny Subject