I have omitted the construction of the drawers on this job as I have covered virtually identical work in depth in previous mid-century chests of drawers. Suffice to say their construction adhered to the period norm.

The fronts of the oak lopers were veneered with ash and then cockbeaded in the same manner as the drawers (fig. 1).

A loper requires two stops; one – similar to a drawer stop – to prevent it from disappearing inside the carcase and a second one to restrict its withdrawal from the carcase. The former comprises a simple glue block at the rear of the carcase side and the latter is attached to the loper itself and stops against the back of the adjacent vertical divider.

I bored a Ø5/8″ hole through each loper and then with the lopers in place in the bureau, I tapped stout, slightly tapered pegs into the holes (fig. 2).

The backboards warrant a brief description as they vary from the more common plain butt-jointed backboards. Backboards can shrink across their width and those that are simply butt-jointed together often reveal gaps (and sometimes daylight) upon shrinking, which normally go unseen when hidden behind drawers, however, bureau backboards are visible with the pigeonholes vacant. Of course, once the bureau becomes inhabited and the pigeonholes are populated with stationery etc., the backboards are less likely to be visible. All the same, it’s a nice touch to half-lap the backboards (fig. 3) – as they were on the original bureau – which permits a degree of shrinkage without creating gaping voids. 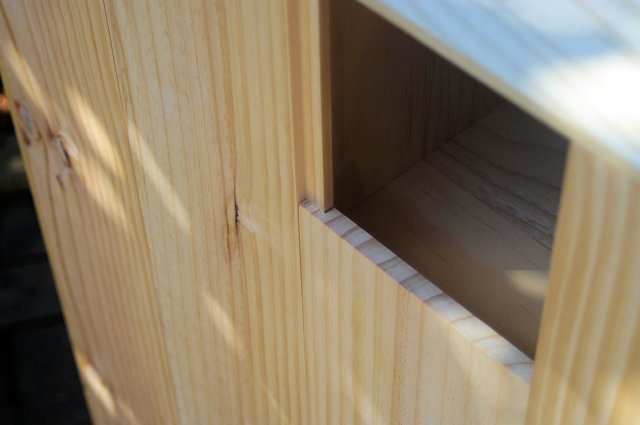 That’s the cabinetmaking all done barring the interior drawers and tabernacle which will be completed at a later date (the reason for which will be revealed in an upcoming post).

Fig. 4. Interior (minus drawers and tabernacle). 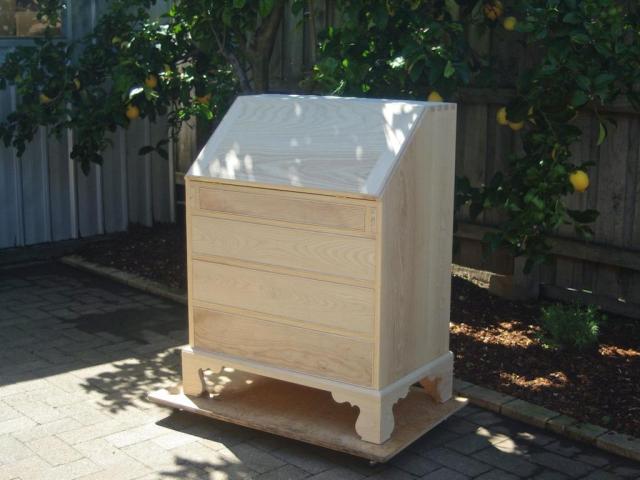 Formerly from the UK, Jack is a retired antiques dealer and self-taught woodworker, now living in Australia.
View all posts by Jack Plane →
This entry was posted in Case Furniture and tagged backboards, carcase, cockbead, glue block, lopers, pigeonholes. Bookmark the permalink.