The last successful invasion of Britain by France was, as everyone knows, in 1066 when the Normans stepped ashore at Pevensey in Sussex with 10,000 men and 400 official embroiderers to record the event. (The majority of English didn’t actually consider the event an ‘invasion’, rather, an opportunity to avoid the import tax on French brandy.)

Today marks the 218th anniversary of the Battle of Fishguard – also known as ‘The Last Invasion of Britain’. Around 1,400 troops from La Legion Noire attempted a three-pronged attack on Britain and Ireland under the command of Irish-American Colonel William Tate. It didn’t go well from the start: The landings in Ireland and the North of England failed utterly, but Tate and his motley crew did land at Carregwastad Head near Fishguard in Wales (left coast of Britain).

The bulk of the force comprised irregulars (most of whom had been released from gaol for the occasion) who began looting the area while the remainder rolled out their beach towels on Goodwick Sands.

The local fishermen were out in their boats at the time, but a solid defence was mounted by the village’s formidable women folk, lead by Jemima Nicholas – latterly known in the Welsh tongue as ‘Jemima Fawr’ (Jemima the Great).

Tate surrendered and was imprisoned, but Britain later returned him and his remaining misfits to France in 1798 as part of a prisoner exchange.

It has often been proposed that Fishguard be renamed ‘Frogguard’, but the town’s original name remains – as does the heroine, Jemima’s head stone. 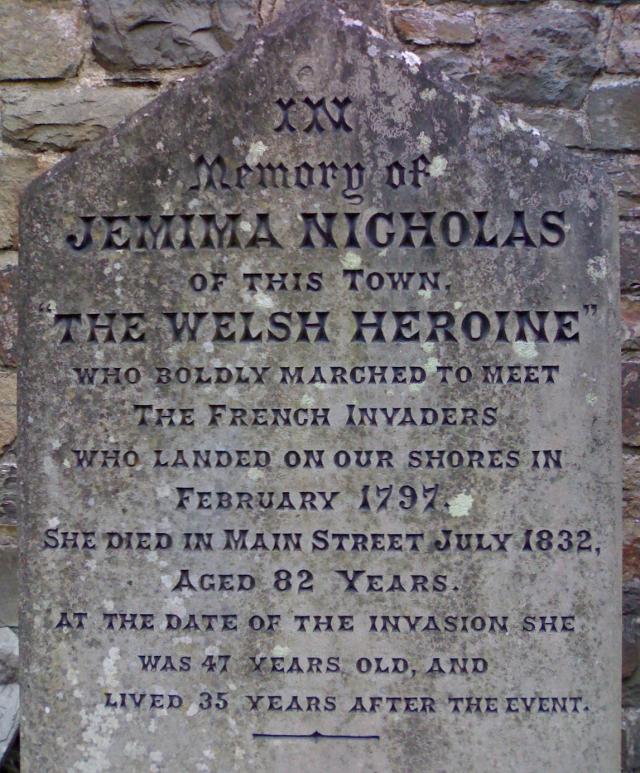 Formerly from the UK, Jack is a retired antiques dealer and self-taught woodworker, now living in Australia.
View all posts by Jack Plane →
This entry was posted in Distractions and tagged Battle of Fishguard, Jemima Nicholas, Pevensey, The Last Invasion of Britain. Bookmark the permalink.