Bonhams have a number of interesting items coming up in The Oak Interior sale in Oxford on the 13th of May, 2015.

One lot that caught my eye is this early seventeenth-century oak ship’s table (lot 106). 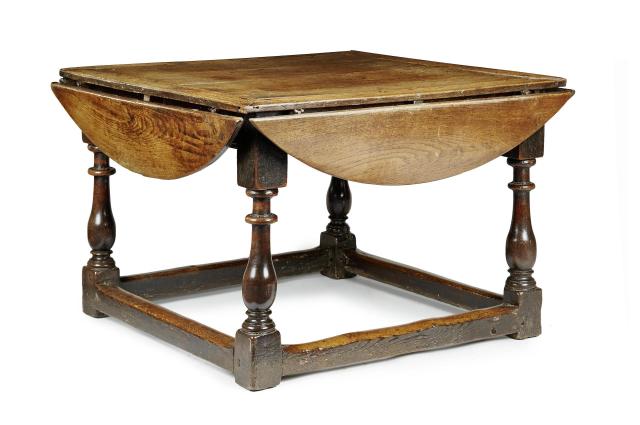 Large circular oak tables of this style and period are common enough; however, manhandling one up and down a ship’s gangway – or within the ship itself – would have been virtually impossible. The solution was to make a demountable table in two or more sections that, once onboard, could be manoeuvred within the ship’s confines as required.

The table illustrated above is just such a table: The removable top has four elliptical drop leaves which fold to form a compact square. The top rails and upper, square leg sections form another component, while the bottom rails and baluster turned portions of the legs make up the last constituent.

Several of these early maritime tables are known to exist including examples in Southwold Church, Suffolk; the Governor’s Palace, Colonial Williamsburg; and the Chapter House, Manchester Cathedral (which reputedly came from Bramshill Park, Hampshire).

Formerly from the UK, Jack is a retired antiques dealer and self-taught woodworker, now living in Australia.
View all posts by Jack Plane →
This entry was posted in Maritime Furniture, Picture This and tagged baluster, drop leaf, maritime furniture, oak, table. Bookmark the permalink.

3 Responses to Picture This LI