By the middle of the eighteenth-century, European walnut’s virtually sole dominance waned as mahogany furniture became the height of fashion. Records show that imports of mahogany from Central America rose exponentially while imports of the formerly highly prized European walnut essentially ceased.

Why then – if all this preamble is to be believed – would an obviously immensely skilled and otherwise contemporary mid-century cabinetmaker create a high status chest of drawers in the very latest taste incorporating a caddy-top, serpentine front*, dressing slide, canted and blind-fretted corners and ogee bracket feet – but veneered in the old fashion; all feather- and cross-banded in European walnut? (fig. 2)
* The serpentine shaping of the French commode, here used in a very mild form, was much more difficult and expensive to produce than the straight front, but brought a greater elegance which fashion among wealthier patrons demanded.[i] 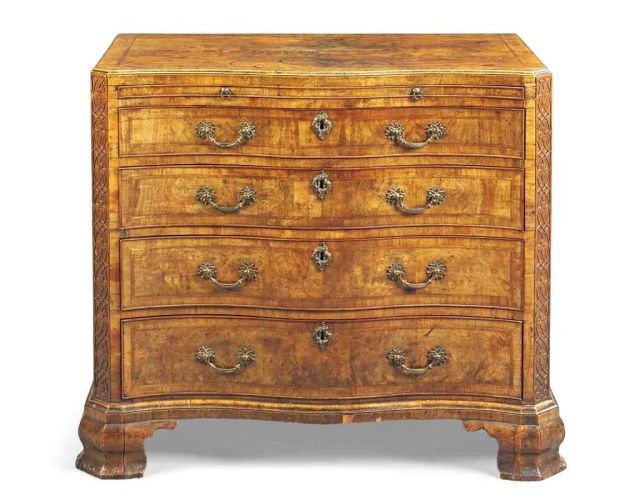 Perhaps Elizabeth Bell & Son (Philip)? Who knows. At any rate, it really is an absolute belter!

Among collectors of English furniture in the first half of the 20th century the name of Geoffrey Blackwell O.B.E. (1884-1943) must rank alongside those of Percival Griffiths, Claude Rotch and James Thursby-Pelham. At a time when, despite economic depression and the shadow of war, there was a strong market for English furniture and an apparently limitless supply of top quality pieces aligned with renewed scholarship, Blackwell assembled a distinguished collection that has proved a magnet to like-minded collectors ever since.

Blackwell was interested in art from an early age. He joined the family-firm of Crosse & Blackwell, becoming chairman before the Second World War. He gathered a notable collection of impressionist landscapes, commissioned portraits of himself and his family, and became an active member of the National Art Collections Fund. He was unusual among his peers in being on friendly terms with living artists and in mixing modern pictures with Georgian furniture.

His interest in furniture was probably sparked in the 1920s when Percy Macquoid and Ralph Edwards’ seminal Dictionary of English Furniture was first published, 1924-27, and crucially he was a friend of the writer and critic R.W. Symonds (1889 – 1958), whose research promoted the more refined decorative arts of the 18th century, now considered the ‘Golden Age’ of collecting. Symonds actively advised collectors and played a major role in the formation of almost all the great 20th century collections of furniture and clocks, including those of Percival Griffiths, Eric and Ralph Moller, J.S. Sykes and Samuel Messer. His influence persists through the five major books and countless articles that he wrote, often illustrating them with items from those collections, his primary aesthetic consideration always being well-balanced design, high quality carving and timber, and original patination, rather than provenance. Blackwell too benefitted from Symonds’ advice and by 1936 his collection was of such calibre that Symonds wrote a two-part article published in Apollo, illustrating it with pieces from the collection.

Given the quality of the pieces that Symonds sourced, certain items have been bought and sold between collectors, and there was keen rivalry to own the best pieces.

Over the years since Blackwell’s death successive generations of collectors have similarly sought out and competed for pieces that were once part of this and other Symonds collections. The Blackwell provenance is now regarded as a signifier of quality.

This walnut chest, formerly in Percival Griffiths’ collection, is perhaps one of the most outstanding, yet idiosyncratic chests, representing the late use of this veneer on a piece that is stylistically more typical of the age of mahogany.

The chest’s drawers and dressing slide retain their original brasses, which quite unexpectedly posed a bit of a problem. However, in the past few days, events have lead to a solution to the dilemma and have prompted this, the first post in a series in which I will attempt to recreate this magnificent walnut chest of drawers.

Formerly from the UK, Jack is a retired antiques dealer and self-taught woodworker, now living in Australia.
View all posts by Jack Plane →
This entry was posted in Case Furniture and tagged chest of drawers, mahogany, oak, walnut. Bookmark the permalink.

10 Responses to A George II Walnut Serpentine Chest – Part One