This splendid early eighteenth-century walnut breakfront chest-on-stand comprises a number of features that stylistically, span several decades: The chest’s frame-and-panel gables’ origin is in the last quarter of the seventeenth-century; the double bead drawer aperture moulding enjoyed popularity from 1700 to at least 1735; the large cyma recta top moulding and large projecting waist moulding were fashionable from 1715-25; the chest’s escutcheons were alamodic from 1715 to about 1730 (the chest’s vendor concedes the mid-century style bail handles are later) and the stand’s two ring pulls (which, apparently, are original) enjoyed popularity from 1690 to 1755.

The vendor doesn’t mention if any locks are fitted to the drawers or whether the escutcheons (and backplates with keyholes) are purely for show. The status of the piece would lead me to believe locks are/were fitted, in which case, I would tend to think – other than the ring pulls on the small drawers in the stand – the handles would have been early bails, en suite with the chest’s escutcheons (the stand’s escutcheon appears to be a later replacement), as otherwise single rings would coincide with the top two drawers’ locks.

The chest would have been made for a well-established client who was familiar with, and appreciated, frame-and-panel construction. The frame and panels are neatly moulded which, in conjunction with the classical breakfront and solid oak underpinnings, point to this being a considerable item of furniture.

The fun doesn’t stop there folks; the chest-on-stand incorporates several clever features. There is a small ‘secret’ drawer, partially encased in the outer end of each of the chest’s pair of short drawers. Due to the concave breakfront construction, the outer ends of the drawers are sufficiently thick to accommodate narrow ‘coin-‘ or ‘ring drawers’. I have seen these before (also in a breakfront chest), but they were entirely concealed when the short drawers were closed, whereas these little drawers share a portion of crossbanding (fig. 2).

The other stand-out ingredient is the wooden spring catch used to ‘lock’ each of the stand’s small drawers (fig. 3).

With this particular chest, the downside to the position of the catches is the need to remove the central drawer to gain access to them (fig. 4). 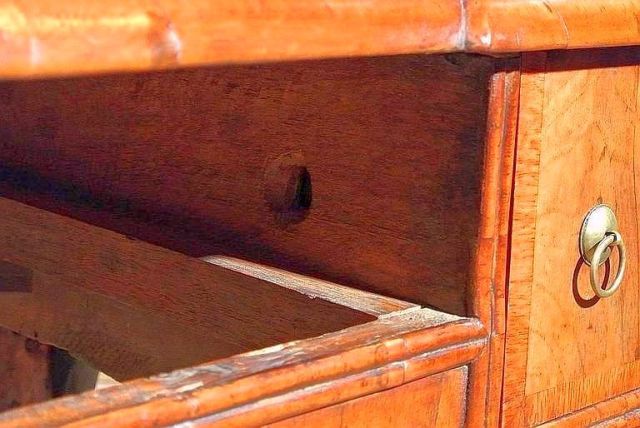 Rare (but canonical) wooden spring ‘pushers’ located part-way along the interior of the central drawers’ sides would have obviated the need to remove the drawer.

Formerly from the UK, Jack is a retired antiques dealer and self-taught woodworker, now living in Australia.
View all posts by Jack Plane →
This entry was posted in Antiques, Picture This and tagged catch, chest on stand, oak, secret drawer, walnut. Bookmark the permalink.

7 Responses to Picture This CXVI