There has been some revived interest in Gothic Windsor chairs in these parts lately. I had an enquiry from a reader about the possibility of my making a Gothic Windsor for him. That’s on-going.

I have also received mail from another reader, Peter Flynn, who, for almost thirty years, has taken a keen interest in Gothic Windsor chairs from an historical perspective. Our dialogue has focused on the central joint atop the back of the typical pointed-arch back Gothic Windsor armchair (figure 1) which was previously discussed in the comments of Picture This LXII.

Peter’s findings are analogous to my own viz. the predominant method of joining the back at the point of the arch is a ‘leg-and-a-half’, lapped and mitred bridle joint, unique, I believe, to these Gothic Windsor chairs (figures 2, 3 and 4) – some barn builder will likely correct me.
Peter has come across left and right-hand variants of the same joint.

Some of these bridle joints are augmented with double-pegs (figure 1) and others with a single peg (figures 2, 3 and 4). 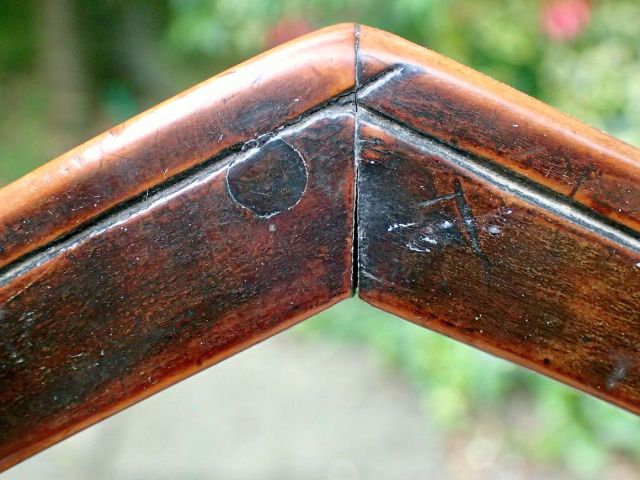 Another method of joining the two halves of these Gothic chair backs is by use of a separate spline.  Dr. Cotton says – as I quoted in Picture This LXII – the “complex interlocking joint” (bridle joint?) is uncommon in these chairs, and describes the use of a “narrow fillet” (spline?) as the norm. That statement is contrary to my, Peter Flynn’s and any dealer’s or furniture restorer’s opinion whom I have conversed with on the matter. I have seen several original butt-mitred joints with loose splines and double pegs; however, a good number of the splines I have encountered were implemented whilst effecting repairs.

There is an arch-back Gothic chair in the Victoria and Albert Museum which Peter has briefly inspected that has a splined back joint. He intends to make a second appointment to examine the chair more comprehensively. I am sure Peter will share his findings with us.

Formerly from the UK, Jack is a retired antiques dealer and self-taught woodworker, now living in Australia.
View all posts by Jack Plane →
This entry was posted in Antiques, Uncategorized and tagged bridle joint, gothic, Windsor chair, yew. Bookmark the permalink.