If you were ever in any doubt that wood is susceptible to shrinking across the grain, then examine the drum table below.

The table top substrate was constructed by edge-gluing several boards together prior to cutting out the requisite circle. With the passage of time, the boards have shrunk across their width resulting in the top now being approximately oval.

Circular tables, such as the breakfast table in figure 2, commonly become ovoid in time, but without a comparative framework, the transition is normally imperceivable. 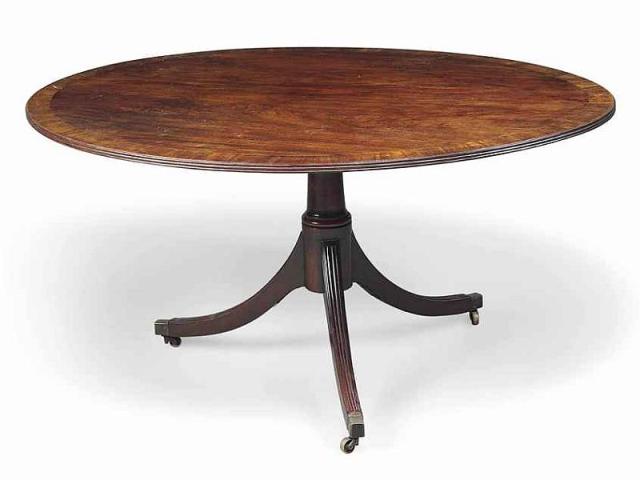 Even tables with shallow aprons (fig. 3) can become ovoid and escape detection as the aprons possess some degree of compliance.

Drum tables are commonly fitted with two or four drawers, requiring a substantial carcase to allow the drawers to operate freely in. A shrinking, parallel-boarded top is unlikely to distort an unyielding drum carcase, hence the visible disparity between the top and the framework in figure 1.

The proper method of forming the substrate of a drum table top is to create an array of interconnecting boards (similar in appearance to the overlying crosses of the union flag), bound by a series of arc sections like the felloes of a cart wheel; with small triangular boards filling the remaining spaces. Thus constructed, shrinkage is no longer unidirectional and the likelihood of deformation is virtually eliminated (figs. 3 and 4).

Formerly from the UK, Jack is a retired antiques dealer and self-taught woodworker, now living in Australia.
View all posts by Jack Plane →
This entry was posted in Antiques, Picture This and tagged breakfast table, drum table, wood shrinkage. Bookmark the permalink.

3 Responses to Picture This XII